As the hundredth anniversary of 11 November 1918 — the end of the Great War — approaches, we will take a look back at what postcards of the time tell us about the four long years that took such a toll on the people of Canada, Newfoundland and many other countries. Coincidentally, the war years brought down the curtain on the “Golden Age of Postcards”; while the medium continued to be popular, the postcard industry as a whole no longer exhibited the vitality and variety of its pre-war heyday.

Postcards mailed in the summer of 1914 can provide us with insights into how ordinary people in the sedate turn-of-the-century world responded to the sudden intrusion of war into every aspect of life. Exhibit 1 is the Stedman Bros. “patriotic” shown below, which depicts departing Canadian soldiers while assertively proclaiming: “Canada Will Do Her Duty To Keep The Old Flag Flying”.

On turning the postcard over, we find that it was posted at Toronto on 13 September 1914, barely a month after the state of war officially began. In fact, things had unravelled so quickly that the Canadian National Exhibition had no opportunity to re-think its 1914 theme of “PEACE YEAR”, neatly incorporated into the special CNE “slogan cancel” that we see here.

One might wonder how Stedman Bros. managed to print up World War I cards such as this so quickly. The answer is that they didn’t, really — this example, numbered S.B. 2539, was in fact an old Stedman card on which the small photograph of the departing soldiers was pasted (the card originally featured a coloured illustration of an R&O ship). To complete the metamorphosis, the caption about “doing her duty” was overprinted on the image in silver lettering. (Indeed, since Stedman Bros. are thought to have exited the postcard trade in 1914, it is possible that the refurbishment of these cards as World War I souvenirs was someone else’s handiwork.)

The message itself is, of course, another place where we might hope to find  reference to the big news from Europe. However, even though her words were destined for England, the writer didn’t acknowledge that anything out of the ordinary was going on. By the end of her note she had apparently run out of things to say — or so we might surmise, given that she filled the rest of her space in the time-honoured way, with bland observations about the weather!

The story of the Queen’s Own Cameron Highlanders of Canada is well told on the regiment’s own website. The Camerons, from Winnipeg, were the first Highland regiment in the West, having been founded on 1 February 1910. It is unlikely that the original members would have anticipated the sacrifices that they and their mates would be required to make within just a few short years. Even at the Decoration Day festivities on 10 May 1914, as depicted in the Maurice Lyall real photo postcard below, it is unlikely that the kilted marchers imagined that before the summer was out, some of them would be halfway across the country, and then halfway around the world, fighting for real.

We encounter the Camerons again on the Valentine & Sons postcard below (106,330), which may well have based on a photograph taken the same day (and perhaps by the same photographer) as the postcard above. Posted on 22 September 1914 by a Royal Bank of Canada employee to a colleague who had evidently been transferred to the Bank’s Vancouver branch, its message does refer, indirectly, to the War:

“Hello Mr. Noonan, Just to remind you we have not quite forgotten you in the exciting times we have been having. Glad to hear you have not much to do but don’t get too fond of doing nothing and forget all about Winnipeg. Every body happy in the R. B. of C.”

The 79th trained first at Camp Sewell, near Brandon, and were then sent out to Valcartier, Quebec, just outside the city of Quebec. The following “John E. Walsh” postcard was acquired simply as a handsome Quebec “patriotic” but turned out to have some interesting Cameron Highlanders content on the reverse:

The first thing to note about the back of the Grande Allée card is that it is cancelled with a slogan cancel for the Quebec Provincial Exhibition (31 August – 5 September 1914). Unlike Toronto’s Canadian National Exhibition, the 1914 theme in Quebec was not “peace” but “health” (“l’année de la santé”).

As the Camerons’ website notes, only a limited number of the 79th’s members were sent to Valcartier and then on to England in the summer of 1914. At Valcartier, the Camerons were merged with others from across the country as the 16th Battalion of the Canadian Expeditionary Force. While it is brief, the card’s message provides at least some information about the Highlanders’ life at Quebec:

Having a good time down here up at 5:30 in morning. Drill all day. Getting quite thin. Remember me to Overseas bunch if you see them on Tuesday. R.M.”

As the sender is identified by initials (“R. M.”) only, the only significant clue is the recipient, J[ohn] France Hughes of the Great-West Life Assurance Co. of Winnipeg, who turns out to have been an actuary with Great-West. Hughes was born in England around 1885, had emigrated around the turn of the century, and by the time of the postcard was married and living at 609 Spence Street, a house that still stands at (what is now) the corner of Cumberland Avenue. The “Overseas bunch” sounds as though it might have been an informal weekly gathering of British immigrants — as R. M. probably was (although, given his regimental affiliation, he may have been a Scot rather than an Englishman like Hughes). From the handwriting and the fact that his social circles included a well-paid insurance professional, one might also conclude that R. M. was likely well educated.

In any event, this is a good example of what we can learn from postcard messages about the very earliest days of the Great War.

Canadian soldiers in other countries’ cards

Canadian First World War collections often include postcards from other countries that depict the Canadian war effort. One scarce example is this collotype showing the 48th Highlanders — cousins of Winnipeg’s 79th — as they leave “Torento (Canada)”. One supposes this scene to be somewhere in the vicinity of Union Station, with the departing men parading in the pouring rain. Produced by Le Deley, imprimeur et éditeur (printer and publisher) at 127, boul. Sébastopol in Paris, this particular example was not used.

Our final example is a British card celebrating “Canada’s Men”, poetically, as “the Bravest Men — we’ve seen of late / That have crossed the Atlantic Sea”. The quality of some of the verse suggests that the poet may have been working to deadline, but overall the expression of Britain’s appreciation comes through clearly enough and, I’m sure, was much appreciated by its recipients. The card — the British publisher of which is not identified — was posted within the U.K. on 26 December 1916.

We’ll try to post some other World War I postcards over the next few weeks, as the hundredth anniversary nears. 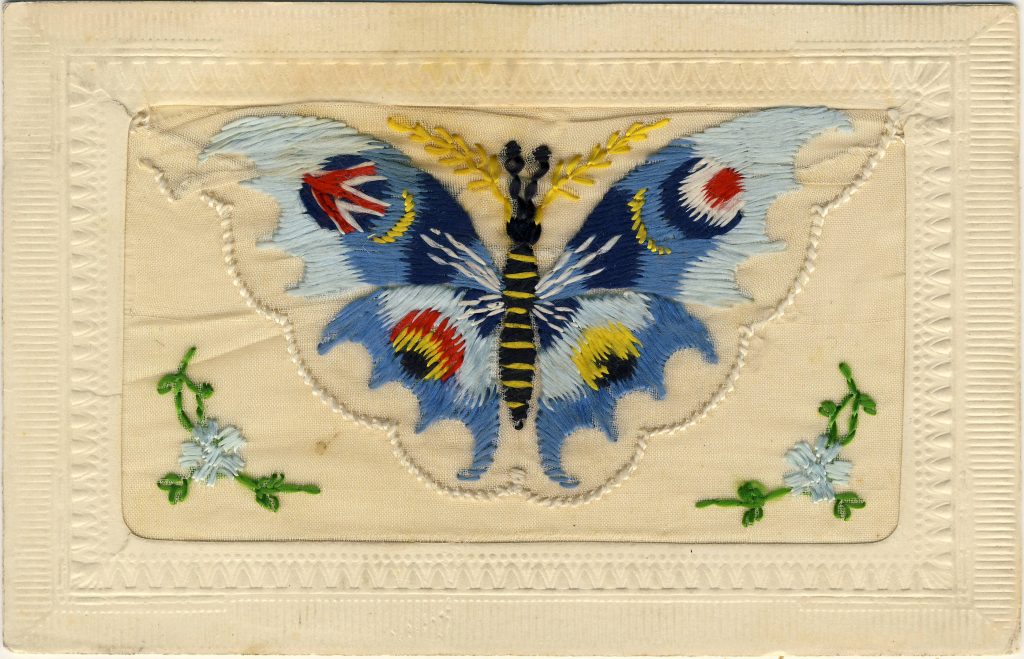