One of the many satisfying aspects collecting postcards is solving the mystery of an otherwise unidentified view. This is our record of several that have come our way that are now better understood from research by our members and contributors. Submissions are welcome and should be sent to info@torontopostcard club.com

Mystery Postcard #7.  We actually know where this is – the Creighton Mine in Sudbury.  What we’re looking for is an approximate date and photographer ID.

The back is unusual and may  help but we are not familiar with this RPPC back style.

A partial answer from John M: You are looking at the Creighton #2 shaft combination headframe/ rockhouse. #2 shaft was, as was common to most early Sudbury mines an inclined shaft. In this case I believe it was about sixty degrees inclination. The skipways, which are the rails the skips (the carriages that hoisted the ore from the mine to the surface) travelled on can be seen exiting the ground and climbing to near the top of the headframe. Which is the tallest part of the structure. The remainder of the structure was called the rock house. There were two skips arranged so that as one loaded with ore was hoisted, the other empty one was lowered down to be refilled. There was also a third compartment in the mine shaft that was used for utilities like air and water, and also for the miners to descend into the mine.

As the skip reached the top of the headframe, its contents were unloaded into a crusher which broke the ore into manageable pieces which were then fed by another machine onto moving beltways were men standing beside the belts would pick out any waste rock. Ore was then sorted through screens by size and it and the waste rock wound up in bins on the second floor. Ore cars on three tracks that ran through the building on the ground floor would then be loaded for shipment to the roast beds and finally the smelter. A string of ore cars can be seen to the right of the photo.

#2 headframe burned and was dismantled in 1917, giving the absolute latest date of the photo, however there are other clues which will narrow the date even further.

#3 headframe was built just to the west (right) of #2 beginning early in 1913. Since there is no sign of construction of #3 shaft in this photo, it cannot be taken later any than late 1912.

The roof line of #2 headframe changed orientation from east-west to north-south sometime early in its life. This photo shows the early east-west orientation. Furthermore, early photos, like this one, show the headframe painted either white, or some very light colour (hard to tell with b&w photos), while later photos show it being a very dark colour. I would estimate that this photo was probably taken no later than 1910. So my final educated guess would be that this photo was taken sometime between 1906 and 1910. 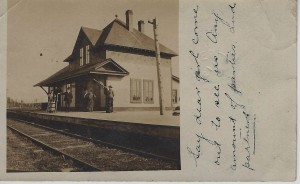 Mystery Postcard #6. Looking to ID this RPPC train station. It was addressed to Exeter, Ontario. There is part of an impression of a postal cancellation on the front that also appears to be Exeter. A TPC member reports that the train stations of Port Clyde, Lockeport, Port Mouton on the Nova Scotia Liverpool to Yarmouth route look remarkably similar. The one difference is that our unknown station does not have the porch platforms that the others have. Another source from a  rail historical group wrote ‘it appears to be a fairly standard Canadian Northern/Canadian National class 3 station – dozens of them were built across the country on CNoR/CNR properties in the 1910 to 1920 era, from the South Shore of Nova Scotia (such as Port Clyde) through northern Ontario to the Prince Rupert line in BC. The log cabin and telegraph pole suggest a treed area, rather than open Prairie, but that leaves a huge swath of territory.’

And the latest contribution:The image is representative of an early Canadian Northern Railway (CNoR) Standard Third Class Station (CNR Plan 100-3). The prototype, designed by corporate architect Ralph Benjamin Pratt, Winnipeg, was issued on 18 September 1901. It reflected the CNoR’s desire to create an immediately recognizable architectural logo for its depots.Between 1901 and 1924, 400 Third Class Stations were constructed in western Canada by the Canadian Northern and Canadian National railways. Similar depots also appeared on some of the CNoR’s lines in Ontario and Nova Scotia, but other than a handful of these, most had different architectural features that are not reflective of the image. As such we can reasonably assume (?) that the image was on the company’s Western Lines, specifically between Port Arthur and Edmonton, the geographic limits for this particular “phase” of the design. There were five distinct “generations” or “phases” of this pattern, plus a few larger variants. Each successive phase had improvements, most relatively minor. The image represents either the first generation (59 built – 1901-1906) or the second (18 built – 1906-1908). While the stations are “standard”, they were prone to some deviation in detail that can help to refine the search, namely: orientation (left hand–at least 4-or right hand–at least 69), the construction details of the triangular pediment (shown is the most common of the three variations), and the decoration, if any, that surmounted the peak of the pyramid roof (the galvanized ball was uncommon). Taking all of the foregoing into consideration, the image is likely of the depot erected at Lamont, Alberta in late 1907; far from definitive, but we can certainly eliminate 90% of the known examples of this design. Hopefully, we can get additional information sometime in the near future, to determine its correct identity.
More on these class 3 stations here: Canadian National Railway Stations of Central Alberta – Forth Junction Please send any additional info with supporting information to info@torontopostcardclub.com. 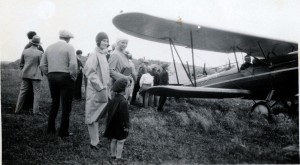 UNSOLVED Mystery Postcard #5. Trying to confirm time and place of this view. The owner of this airplane RPPC was told that it was taken in Sudbury in the 1930s and he would like to know why. The tail letters are NC then?3K.  Click on the picture and it will enlarge. Please send any theories with supporting information to info@torontopostcardclub.com. NEW INFORMATION from Dave H: – I believe that the aircraft is pre-1938, NC denotes American Commercial registration. It is possibly a mail plane from a U.S.city, maybe a first flight from ? to Sudbury. 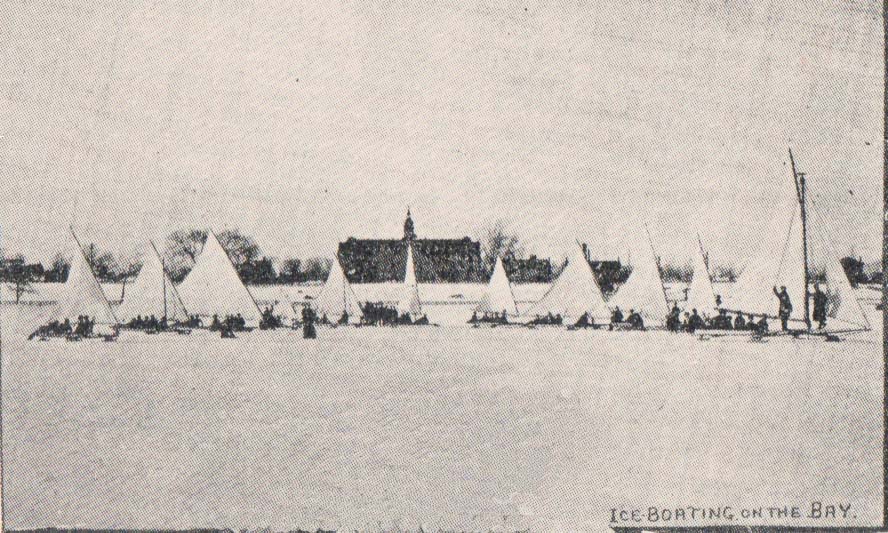 POSTCARD QUEST Mystery #4 – This view is from the 1890s on the Bay of Quinte in Belleville, Ontario.The building behind the boats is what was then known as the Ontario Institution for the Education and Instruction of the Deaf and Dumb (now the Sir James Whitney School for the Deaf). This photo was copied from the school’s semi-monthly publication called The Canadian Mute (March 1, 1898, Vol. 6, No. 16, Page 5). There was also an accompanying description which read: “Our former pupils will recognize in the engraving on the front page some of the familiar scenes of the Bay of Quinte.  “The engraving was taken from a photo of the Institution ice-boat fleet and some of our readers may be able to recognize their own shadows in the group.” If you have any information about this photo or know where an original copy or copies might be found, please E-mail the Toronto Postcard Club at info@torontopostcardclub.com 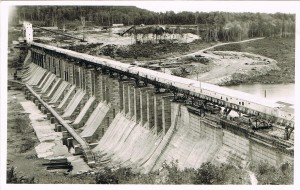 Mystery Postcard #3 Dam Discovered! We received a clue that this dam was likely in Quebec and of one of the many Hydro Quebec expansion projects underway around 1962. An Internet search for ‘Hydro Quebec dam pictures’ took us to the Hydro Quebec website which has a comprehensive list of their hydroelectric generating stations – with pictures! After examining the pre-1962 dam pictures we decided that Rapide-7 was the most likely match. More Internet searching of Rapide-7 brought us to the discovery of another name for this location, ‘Rapides-des-Joachims’ and from that to The SWISHA Project, a visual documentary of the 1940s construction of a major hydro electric power dam on the Ottawa River at DesJoachims, pronounced locally as ‘D’Swisha’. Produced in 2003, by the the Rolph, Buchanan, Wylie and McKay Historical Society who own and operate the School House Museum in Laurentian Hills, Ontario, The SWISHA Project has over 300 views of the dam construction and of the impacts that it had on the local people and their communities. We contacted John Wright at the School House Museum who offered that “the cement mixer which shows as a white shape at the far end of the picture looks to be the same as the one in picture 42 of 318 (use the thumbnail tab to preview all pictures) and so your Mystery Postcard shows the McConnell Lake Control dam at the DesJoachims Hydro Electric project on the Ottawa River between Rolphton, ON and DesJoachims, QC constructed between 1946 to 1951. Pictures 137 to 141 are also of this dam.” 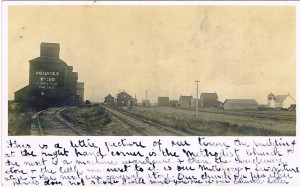 Mystery #2 Solved! … to identify the town where the grain elevator ‘Ogilvie’s No. 100’ in this RPPC stood.(click on the picture to get a larger view) We have a strong indication that it is Wheatland, MB from a postcard  found in the University of Saskatchewan archives on the web-site ‘Wish you were Here’ . The unique form of the church in both views suggested that they were the same. There were two Wheatland post offices in the same general part of the province: one south of Oak River which opened in 1882 and closed in 1905, whereupon the second (and current) Wheatland — near what was to become the Town of Rivers — was renamed from “Westwood” (post office). This change was duly noted in the Manitoba Free Press in early June of 1906. Thus the card view is likely later than mid-1906. In addition, the station in the centre distance strongly suggests that this is Wheatland. Very few of this style of depot were constructed and most were constructed as replacement stations in established towns. The Lenore Branch (of the CPR) was one of the few lines that had this style of depot erected on a new branch. Identical depots of this style were erected at Wheatland (x-Westwood), Kenton and Lenore on that branch. See a 1970 photo of the Wheatland depot here. We are still hoping to verify that this is Wheatland by a reference to an Ogilvie grain elevator #100 in that town but we’re 99% sure that it is Wheatland. Thanks to the 3 TPC members who provided the above insights. Our search has taken us to several interesting related web-sites such as grainelevators.ca.  If you can add to this knowledge, please let us know.
NEW INFORMATION from Bill G. – “On behalf of the United Church of Canada I am researching churches in Manitoba particularly Methodist and Presbyterian.There was a Methodist Church in Wheatland and from my information it was built in 1903 It was sometimes also referred to as Westwood Methodist. I think this adds to the verification of your identification of this card.” 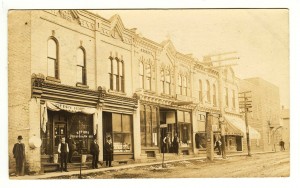 Mystery #1 Solved! Thanks to Paul from Warkworth for giving this main street RPPC an identity. It’s a view of Blyth, Ontario. Using ancestry.com, Paul searched for ‘Dr. W.J. Milne’ as seen on the shop awning to the far right of the photo and found that he had practiced in Blyth in the early 1900s. He then found a  Blog about Blyth where the picture of the main street confirmed his research. The buildings still stand as seen in this Google maps photo but they have lost much of their grandeur. Demonstrating the power of the Internet and the lure of the history revealed in vintage postcards, the request for help in identifying this card came to us from The Ontario Historical Society which had been contacted by the RPPC owner from Colorado!