THE DEAD ONES MYSTERY

Sometimes postcards are the leading edge of trends. Sometimes you just can’t be sure. And that’s the case with this postcard featuring ‘Dead Ones’. What’s it about? 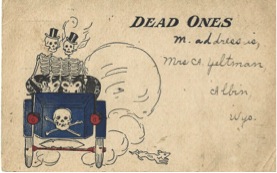 What’s this card about?

The card is postmarked from Osceola, Nebraska in 1908. “Where the heck is that”, you ask? A reasonable question. A bit of internet research shows that Osceola’s population peaked in 1920 at 1,200 people and by 2010 that number had declined to 880. So it’s a small, unimportant town in Midwest America.

Reportedly Osceola had a major fire in 1895 which left only two buildings in town standing. But that was a full 13 years before this card was sent, so it would be a little late to have anything to do with the fire. The mystery must have had another solution.

These two people are in an automobile. Was the postcard memorializing a fatal car crash? I don’t think so. There are postcards of major disasters, but not of automobile fatalities. Let’s look again. If you looked carefully, you would have seen what I did when I bought this card several years ago – even though it had nothing to do with what I collect.

Mystery solved. My thesis is that this is an anti-smoking postcard. Ironically, it would be just as timely today as it was 108 years ago. The message makes no reference to the image on the front, so presumably the belief was that this card would speak for itself. It’s certainly a long way from the ‘pretty’ card that the sender reports receiving from the addressee, but it’s an amazing piece of social history. 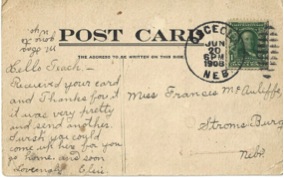 Barb Henderson of the TPC sends along a great image of a leather “Dead One” (back and front), postmarked at Toronto in 1906. She comments that, with the information we learned from this discussion, postcards of this odd type now make more sense… 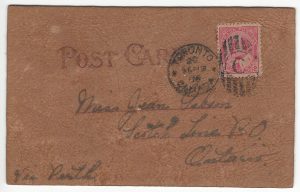 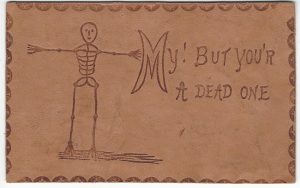