POSTCARD DIGITIZATION (AND SOME STARS OF YESTERYEAR!)

The Winnipeg Public Library is engaged in a major postcard digitization project, based (thus far) on the collections of two TPC members – Rob McInnes and the late Martin Berman. The postcard images that have been uploaded so far are available on the Library’s impressive Past Forward website. In the course of working on the collection, one of the librarians, Christy, unearthed a great story after finding a postcard written from Winnipeg by an early twentieth-century actress who went by the stage name Ruth Maycliffe. Ruth’s story, together with some context from Christy about to the Library’s impressive project, is recounted in this post on the Library’s “Readers’ Salon” blog. It’s well worth reading.

Postcards of popular stage personalities were collected with great enthusiasm at the height of the postcard craze (roughly 1905-1910). However, because the names are rarely recognizable to us, today’s collectors often don’t show much interest in the cards that depict them. That’s unfortunate, because with a little online research performers’ publicity postcards often yield up interesting stories. Not infrequently, the careers of the vaudeville-era actors who appeared on early 20th century postcards carried on right into the television era. As a random example, one very Edwardian-looking music-hall actress whose postcard somehow ended up in my collection turned out, on further investigation, to have been a guest star in several episodes of Rod Serling’s The Twilight Zone (playing a very old lady, of course!)

Below is a typical card of this genre, a “Philco” effort showing the (once) famous Dare sisters — Phyllis (1887-1975) and Zena (1890-1975) — together with their mother, Harriette Dones. These cards were especially popular in England, with major publishers constantly issuing new series featuring West End actors, sometimes (as below) in the fashions of the day and sometimes as they had appeared in their most recent or most famous roles: 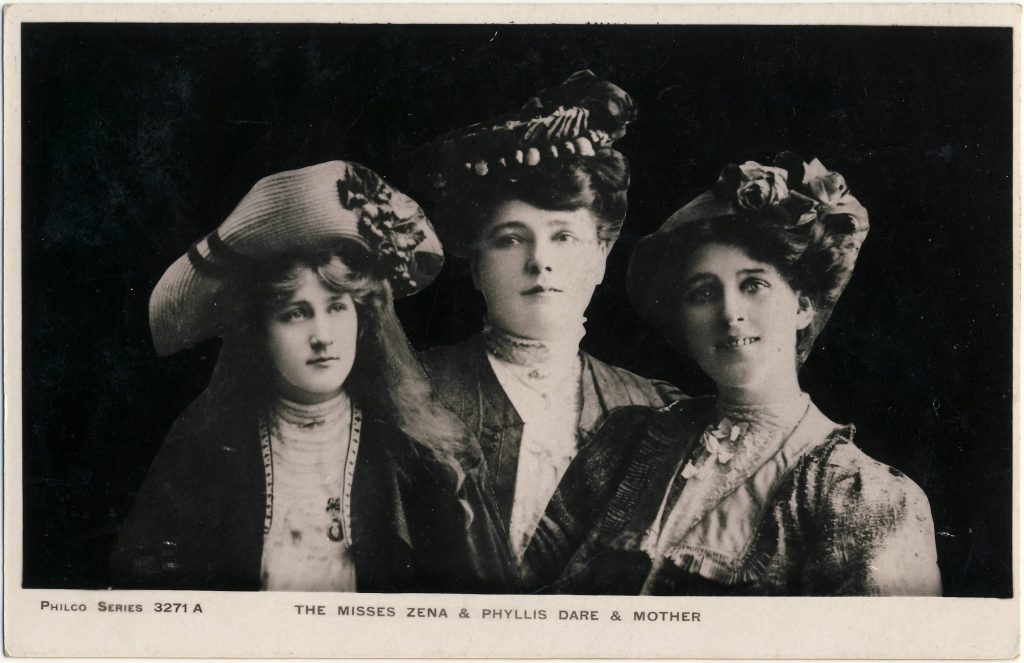 By the way, we’re always interested to hear about postcard digitization projects from anywhere in Canada (or anywhere else if the subject-matter would interest our members). Please send us a note if you know of any that aren’t mentioned on our site.