By Card Talk Editor February 18, 2018 December 3, 2021 Maritime Provinces, Postcard Events and Shows, Postcard History, Prince Edward Island
The postcard photographs of William S. Louson are the subject of a new exhibit at the Confederation Centre Art Gallery in Charlottetown. Louson was the leading amateur photographer of Prince Edward Island in the pre-WWI period and is one of the few identified postcard photographers in Canada. The exhibition, curated by Harry Holman (TPC#1534), features photographic images produced by Louson including images from his original negatives, copies of views which were featured in a range of local and national magazines, and a large collection of postcards, most of which were published by the Toronto firm of Warwick Bros. & Rutter. The exhibition also includes Louson photos which were used by other publishers without credit to Louson. 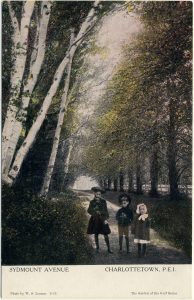 According to Holman “Louson is without doubt the most important and interesting photographer in the history of early P.E.I. postcards. His black and white images were given a new dimension with the colours added by the postcard publishers.  This served to make Louson’s view of the province as a gentle rural landscape the dominant perception of the Island in the pre-war period.”
The exhibition continues at the Gallery until April 21, 2018.
Bookmark the permalink.