PHILATELY AND DELTIOLOGY: WHAT DIVIDES US? (THOUGHTS FROM 1903)

Poking around the Internet on a summer’s evening, I came upon a brief book review of All About Post-cards, one of the first postcard guides, published by Walter Scott in Leeds (England) in 1903. Appearing in The London Philatelist 12:140 (August 1903), the anonymous reviewer is of the view that the study of government-issued postcards (of the traditional picture-less type) does constitute a branch of philately. In stark contrast, the collection of privately-produced picture postcards is something else — and, whatever it may be it is not worthy of discussion in the august journal of the Philatelic Society, London!

So there is an early attempt to define the place where philately ends and where the realm of what was then known as “cartophily” (and later as “deltiology”) begins. The key, in the reviewer’s mind, seems to be the “official” nature of both stamps and government-issued postal cards.

As for the book, which sounds pretty interesting, it seems to have gone the way of so many of the guides and magazines that accompanied the postcard boom of the early 1900s. Other than the London Philatelist‘s book review, few traces of All About Post-cards exist online. If anyone has seen the book, we would be interested in hearing about it. 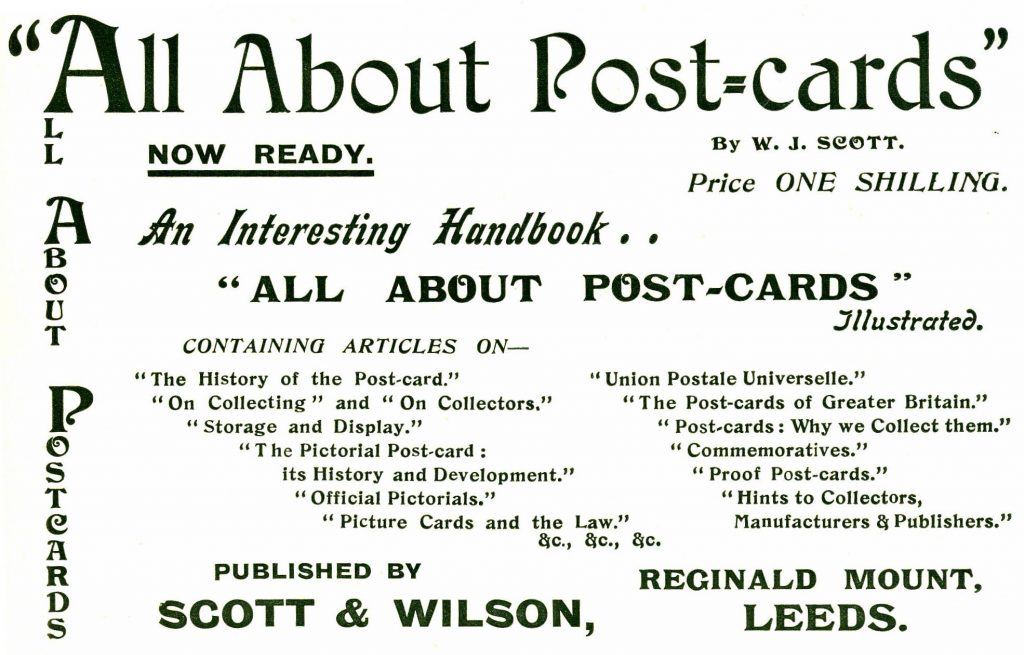 Advertisement for Walter J. Scott’s “All About Post-cards” as published in a popular postcard collectors’ magazine.

The reviewer’s rather snide opening suggestion that the book might be considered more self-promotional than scholarly relates to the fact that its author, Scott, was himself a significant publisher of picture postcards, particularly of scenes from around Yorkshire. He does not appear to have been connected with the Walter Scott who published postcards in Barrie, Ontario, around the same time.

In any event, in case it is of interest to anyone with a foot in both camps (stamps and cards), here is the full review as published by the London Philatelist exactly 115 years ago:

‘“THERE is nothing like leather,” cried the shoemaker, and it is only natural that Mr. W. J. Scott should sing the praises of the wares that his firm so largely deal in. The book in question, containing some seventy pages devoted to the post card — official and pictorial — and thirty-four pages of the firm’s price catalogue of the same, bears out our opening quotation. None the less, this little volume will be found to afford both interest and information to those who are interested in entires, the author acknowledging his indebtedness to Mr. W. B. Warhurst, the well-known collector and worker on the subject of entires, and to Mr. E. W. Richardson, the editor of The Picture Post Card. The letterpress, divided into nearly twenty chapters, devotes about equal space to both sections of the subject, but there is an obvious leaning on the part of the author to the “fascinating hobby” of pictorial card collecting.

‘This is not an “interesting branch of Philately,” as are termed the regular post cards, and does not call for any comment in our columns. Of its amazing popularity we have had abundant evidence as previously recorded in our pages, and we see no reason why such charming and artistic mementoes, produced at a price that places them within the reach of all, should not have an abiding and brilliant future. As regards officially issued post cards, we should be only too glad if this branch of Philately could be reinvigorated and sustained; it has the merits of straightforwardness in issue, limits in numbers, and relatively small cost, and we should rejoice to see its adherents increased; their bulk is against them, but they are far more easily susceptible of arrangement than are envelopes, and they embrace far less stationery. They have probably been crowded off the philatelic stage by the ever-increasing quantity of new issues of all sorts, and it is to be hoped that by the aid of such excellent advocacy as that of Mr. Scott and others their popularity may be restored.’