All In A Postcard: Go (North)West, Young Man!

Miss Columbia: “She Certainly is Attracting A Great Deal of Attention, And Though I’m Sorry They’re Leaving Me, I Do Admire My Fair Cousin.” (Government of Canada, 1906)

Entitled “The New Belle”, this postcard was one of 12 that are believed to have been published by the Interior Ministry of Sir Clifford Sifton in 1906. The Canadian Government’s design was to promote immigration — specifically, U.S. immigration — into newly opened agricultural districts of the “Great Northwest”, i.e. the newly formed provinces of Saskatchewan and Alberta.

The message of this particular propaganda campaign (essentially, that it’s time to abandon the U.S. for Canada) had to be delivered in strong and memorable way. But, at the same time, to the extent possible, the Canadian Government needed to minimize any offence that might be taken by its U.S. counterpart, which did not appreciate Canada’s (highly successful) entreaties to Midwestern farmers. The caption on this card represents an attempt to toe this very fine line.

The postcard was mailed at Forest Nook, Ontario (a long-forgotten P.O. on Ahmic Lake in Muskoka) to a man in Meadville, Pa., who had previously forwarded the sender a U.S. newspaper story about the size and potential of Canada’s wheat-growing region. Articles of that nature filled U.S. newspapers at that time, in no small measure as a result of the promotional railway tours that Canadian land companies were running for obliging American newsmen.

As a final note, some postmaster somewhere along the way has gratuitously postmarked Fair Miss Canada’s noggin. To avoid fanning the flames of Canadian resentment, I can report that close examination shows that this rude strike at our lady’s dignity occurred at Burk’s Falls, Ontario and not south of the border!  — Andrew Cunningham, Toronto Postcard Club 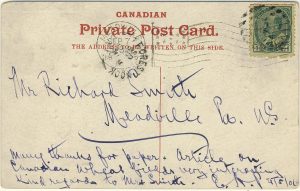 “Many thanks for paper. Article on Canadian wheat fields very interesting.”