Club meetings are held mostly every month from 7:00pm. The first half hour is for the exchange of postcard chat and a free coffee. A presentation of interest to history buffs and postcard collectors follows, or, we have a show and tell exchange about a select postcard topic. Visitors are welcome. 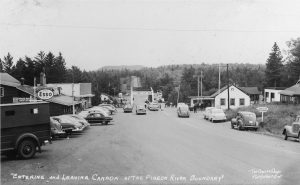 TPC member (#1502) Jeri Danyleyko has spent many years exploring ghost towns and abandoned sites. Pigeon River, Ontario was a small roadside hamlet in Northwest Ontario on the Minnesota/Ontario border. The community’s origins were controversial and unusual.  A popular tourist destination from the 1920s to the 1960s, Pigeon River and the nearby Middle Falls Park (later the Pigeon River Provincial Park) were extensively promoted.  Their stories from beginning to end can be told almost entirely in postcards.  Including over 70 postcards  from her collection and a number of artifacts, this is a story that you don’t want to miss. 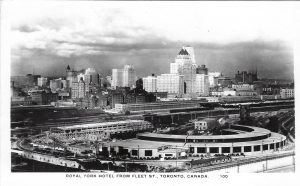 Sat. April 4,  11:00am –  Field trip to the John Street Roundhouse  Attention ‘railheads’ and historians. We’re going to the Toronto Railway Museum at Roundhouse Park. (opposite the Rogers Centre)  Created in 2010, the museum is operated by the Toronto Railway Historical Association.  The John Street Roundhouse in this RPPC view celebrated 90 years  in October 2019. Our tour will highlight the contributions of Toronto’s railways to the development of the city and to Canada.   If you have any postcards or pictures that you wish to share with the group, bring them along. Getting there:  TTC to Union Station and 1) walk or 2) transfer to the 510 Spadina or 509 Harbourfront to the Harbourfront Centre stop and walk north to the park.  Or, take the 504 King car to John Street and walk south past Rogers Centre to Roundhouse Park.  By car: closest parking lot is the Lower Simcoe lot of the Convention Centre. 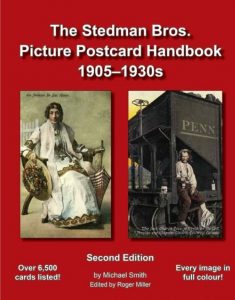 Sat. April 25th  2:00pm to 4:00pm. TPC member #940 Mike Smith updates the Stedman story. Incorporated in 1908 to trade, manufacture and publish books, magazines and postcards, Stedman Brothers Limited had branches in Brantford, Toronto and Winnipeg. One of Canada’s most prolific, early postcard publishers they are thought to have had 9,000 different designs in their repertoire. The firm was so prolific, in fact, that Mike has created a second edition, all-colour Stedman Bros. Picture Postcard Handbook. Come and listen to Mike’s updates on this important Canadian postcard manufacturer.  The book will be available at the meeting for the “show special” price of $45. Sat. June 13th  2:00pm to 4:00pm. Photographic Methods in the Golden Age of Postcards. TPC members #1569 Celio Barreto and #1444 Victor Caratun discovered postcards from their other hobby, photography.  Taking us back to the early 1900s, they’ll tell us about the equipment and methods used by the photographers of the day who took the pictures that are the vintage postcard views in our collections.

es   34 Parkview Avenue in Willowdale near Yonge & Empress.  MAP Free on-street parking after 6:00pm. Accessible by TTC, from the ‘North York Centre’ stop on the Yonge Line 1. Cross to the east side of Yonge and walk 2 blocks north to Parkview Ave. then one block east on Parkview. Cross Doris Ave. to the big red house on the corner by the park. Look for the blue Ontario Heritage plaque out front.